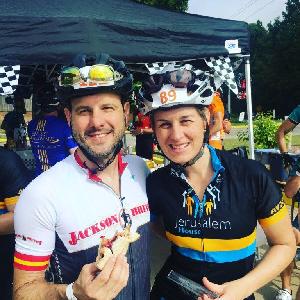 This is Rich's third year and Alexandra's SEVENTH year committed to supporting the AV200 and the goal of eradicating AIDS and HIV. This year we're doing things a little differnetly - Alexadra is part of the SAG Team for the weekend, and Rich is the Co-Ride Director for the ride.

We support and ride because we want to see this disease eradicated not just in our lifetimes, but we want to see it eradicated SOON. Action Cycling Atlanta and the AV200 have raised over $2.6 million to directly fund research at the Emory Vaccine Center.

A few details about this disease:

- 1.1 million people in the US are infected with HIV
- There are 50,000 new infections every year
- 35 million people worldwide are living with HIV
- Atlanta has one of the highest infection rates among young people (18-24) in the country. It is 3x the national average

100% of every dollar donated through this page goes directly to the Emory Vaccine Center - thank you so much for your support!